Posted on September 3, 2014 by The Contemplatress

There is a zucchini. There are several zucchini on the counter. There are zucchini in the garden. Some of the zucchini do not belong because they came from another garden. I left one giant yellow zucchini as a gift on the table of my unofficial in-laws. Apparently, I was not very sneaky in doing so and upon leaving this place found 4 giant green zucchini in my car. A few days later I found giant zucchini in my garden. Those giant green zucchini do not belong. They were strategically placed when I was not looking. 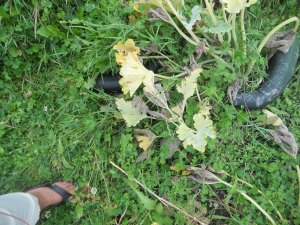 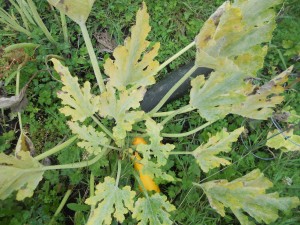 Then, the zucchini war started. Not so much a war but a game. A game of zucchini left here and there such as in the back of a truck, on the runner of the truck, inside the barbecue, on the porch and lastly, upon a fence post.  This last was thought to be a dead cat from a distance when observed by he who had been zucchineed by me. But, alas, no, it was one of the very giant zucchini he had placed in my garden.

Outdoors, I enjoy gardening, hiking, biking, kayaking, wandering the beach and taking photographs. I admit to being a fair weather outdoorswoman most of the time. Indoors, I enjoy cooking as though I am on the food network. My favorite activity may be sitting in the sun reading a book. Probably with a beer. My liberal arts degree didn't help me acquire gainful employment so I became a practical nurse. Taking care of people who can't take care of themselves makes me thankful that I can.
View all posts by The Contemplatress →
This entry was posted in Uncategorized. Bookmark the permalink.