I didn’t hear her meowing in the morning. I didn’t see her sleeping on the pillow that sits on the chair. I didn’t hear her batting her toy down the hall. When I opened the door to check on the dogs the kitten should have been there, balancing on the rail, looking in the window and trying to get back in. Her absence made the outside feel empty.

DC Jody was a kitten on her way to being a cat. She was still eating kitten food but was at the cocky-teenager-stage of kittenhood. She was about six months old, more or less. She had been living with us since I found her outside the grocery store in January. We didn’t let her go outside until after she was spayed. At first, she was terrified of the outside and ran back in whenever possible. Slowly, she got used to the outside. The dogs loved it when she came out. She was a little black creature they could follow around and sniff. She liked the dogs, too. I think they will miss her, especially Max. Max also came to us in January and he played with DC Jody every day.

DC Jody liked to climb in the fruit trees outside but, she wasn’t very graceful getting down and sometimes she just fell out. When she was outside she would hang out with the dogs. Much to our dismay, we kept finding DC Jody in the front yard. We kept sending her to the back…but she was able to climb under the gate or jump over the fence. 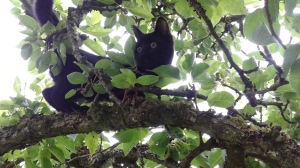 The road is what got her as it got Oscar a little over a year ago now. Well, it wasn’t the road but a car on the road and her lack of fear for this car. She is now buried next to Oscar. Oscar was buried before she was born. Oscar also met an untimely death at only six years old. Maybe if we had kept the cats trapped in the house all the time they would still be alive. But, what kind of a life would that be? Could you imaging to never touch the grass or lie in the sun? I could never do that to the cats.

Perhaps we were caretakers for this little black creature until God needed her back. God must have really needed a kitten to take her so soon. Instead of being surrounded by human (and canine) love she is now surrounded by God. I take comfort in that but, I miss her. We all miss her. I hope she is next to Oscar in kitty-heaven, too.

Outdoors, I enjoy gardening, hiking, biking, kayaking, wandering the beach and taking photographs. I admit to being a fair weather outdoorswoman most of the time. Indoors, I enjoy cooking as though I am on the food network. My favorite activity may be sitting in the sun reading a book. Probably with a beer. My liberal arts degree didn't help me acquire gainful employment so I became a practical nurse. Taking care of people who can't take care of themselves makes me thankful that I can.
View all posts by The Contemplatress →
This entry was posted in animals, waxing philosophical and tagged animals, black kitten, cats, DC, DC Jody, death, dogs, fate, God, heaven, kitten. Bookmark the permalink.