Kombucha. I started to hear about it within the past year. One of our friends was drinking it to help his guts. Maybe even the hippie doctor (rather than the doc-in-the-box) told him to drink it. I don’t recall now how he got the idea. After this brief introduction several months ago kombucha slipped from my mind.

Kombucha returned when a friend from work was talking about drinking it. She said it had probiotics and explained that it was fermented tea. She briefly explained the brewing process:  brew the sweet tea, let it cool, add some kombucha from your last batch, add the scoby, let it ferment for 7 days or so. Repeat.

One day, she brought a sample of her kombucha. It was raspberry. It was a heavenly sweet (but not too sweet) vinegary raspberry tea. Toward the end of the night I said, “If no one else is going to drink the rest of that I’m going to drink it.” The sample was for all of us but some was left unclaimed. My friend recommended I  go for it. She also offered to bring me a scoby. A scoby? OK. At the time I had no idea what a scoby was but if I needed it to brew kombucha I definitely would like to have one.

When I got home that night I looked on the internet for brewing kombucha. I learned what a scoby was:  SCOBY (symbiotic culture of bacteria and yeast). I read about how to make kombucha and how to grow your own scoby. Mine is a slow go on the counter right now so I am glad my friend did bring me a scoby a few weeks later. Also, it was fun to see people asking “What is THAT?” and pointing to a floating pancake mushroom-thing in a jar. 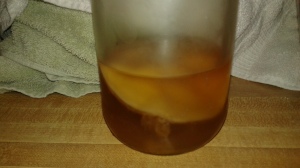 After that first encounter with kombucha I developed an obsession to get some and drink it. I found some at the local market and at the food co-op. I started stopping to get one nearly every day. I felt as though if I did not get a kombucha I would freak out. I was glad to receive a scoby and start making my own as it will be much more cost effective.

Here’s what happens when you are obsessed with kombucha: 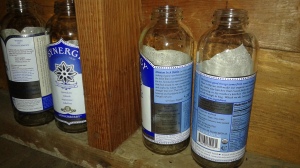 Just the other day my first batch finished carbonating and I placed the bottles in the fridge. After waiting a while I drank some. It was tasty and fizzy, infused with raspberry. I have the next batch on the counter, this time I will infuse with ginger and raspberry before bottling. 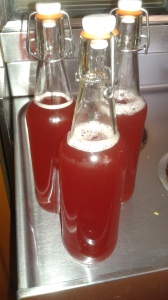 If you want to brew kombucha at home I recommend getting a scoby from a friend and looking at thekitchn.com (how to make kombucha tea at home) for instructions. Worked for me.

Outdoors, I enjoy gardening, hiking, biking, kayaking, wandering the beach and taking photographs. I admit to being a fair weather outdoorswoman most of the time. Indoors, I enjoy cooking as though I am on the food network. My favorite activity may be sitting in the sun reading a book. Probably with a beer. My liberal arts degree didn't help me acquire gainful employment so I became a practical nurse. Taking care of people who can't take care of themselves makes me thankful that I can.
View all posts by The Contemplatress →
This entry was posted in food and recipes, home brewing and tagged beverage, blog, brewing kombucha at home, fermented tea, home brewing, kombucha, obsession, probiotics, scoby, tea. Bookmark the permalink.